Pull Up Your Pants – You Look Like an Idiot! Q & A: Amazing Women with Amazing Jobs: The Woman Who Ran Into the Wild

I was cleaning up the attic today and stumbled upon an old box of memorabilia, and what do you know? I found my old glass slipper! It sure did bring a tidal wave of memories!

How strange, it seems like it was both a million years ago, and only yesterday I went to that fateful ball at the castle, fell desperately in love with Prince Charming and we danced until midnight.

After her gastric-surgery Fairy Godmother now resides happily in Miami with a Cuban dancer, ironically named Fidel although they have one of these ”open” relationships where everyone just throws themselves at anything with a pulse and a magic wand.

She won a kazillions dollars in her defamatory-lawsuit against the Shrek-people for way she was portrayed in Shrek II, and her and Fidel are now running a Cage Aux Folles type establishment, drawing in both the gay community and the tourist crowd. I have never seen her happier.

And, as you know, plastic surgery really worked out for Drizella and Anastasia. They are now both doing spin offs- of the original reality hit ”Keeping Up with the Ugly Step Sisters”, which was launched just in time for a certain sex tape to be ”stolen” and go viral. I always suspected she was an up-the-butt-girl. Charming consequently calls her ”Analstasia”.

Their mother is still a nasty piece of work but I almost feel bad for her. By now, she has had so much botox, the only thing that moves in her face are her whiskers. (For someone so obsessed with her looks, she might try an upper lip wax!) She remarried and now lives with a Baron. Regularly, he “goes to Poland to hunt” – always accompanied by his PA, a 26 year old nazi-looking Harvard grad named Niles. Charming, with his usual charm (eye roll!) once asked her if Brokeback Mountain was in Poland but she just looked at him with surprise. She wasn’t really surprised – she just looks like that.

And Charming… Well.. About two days after the wedding, he started loosing his hair and about ten minutes later, he was bald as a coot. Apparently male patterned baldness runs in those royal linages..

We don’t throw as many ball these days. Charming lost a shitload of money when the US housing bubble bust in 2006 and we downsized from the big castle to a comfortable MacMansion in ’07. That old castle cost a fortune to heat anyway and there were perpetual pest problems – singing mice and birds everywhere, no matter how often we called the exterminator.

We’ve had a good life together. After 20 years and with three kids between us, we are an old married couple. He poops with the door open and I quite honestly don’t wear neither lacy lingerie, nor glass slippers as often as I used to. Those things pinched like hell anyway!

Well. It just comes to show that the idea of life as a fairytale is in itself a fairytale.

Gotta dash – am having coffee with S.B. – or as Charm calls her: “Fleeting Beauty”. Even 100 years of beauty sleep didn’t save her from the wrath of time. We none of us escape that. 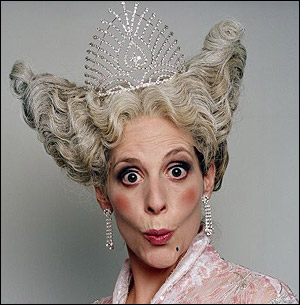